The day I flew back to Canada! And because of going back in time, 2 days in one!

This was my flight schedule:

Brisbane to Los Angeles (with Qantas) with approximately a 3 hour layover. First point of entry into USA so needed to take out and recheck in my luggage… even though I was only flying through. I don’t remember ever having to do this in other countries?

Los Angeles to Chicago (with Qantas) and only a 1 hr layover. As long as I could get my boarding for the next leg before arriving to Chicago, it should be okay.

Finally, Chicago to Ottawa (with United Airlines operated by Express Jet) arriving at 7pm on July 12.

The day immediately started off on the wrong foot when I dropped off my luggage at the Qantas counter in Brisbane. The lady was grumpy and raised her voice at me when I inquired about being unable to print a Chicago to Ottawa boarding pass after checking in online. She practically called me stupid for purchasing a flight with so little layover time and “kindly suggested” not doing it in the future. Knowing it was going to be a long day, I didn’t have it in me to deal with her. It wasn’t until I was boarding my flight later that I realised she never gave me my baggage tickets. If my baggage got lost, I wouldn’t have a reference number to locate it with.

Next was going through security. I had never seen the line up so long before, it was snaking around the entrance foyer twice. I guess good thing I arrived with plenty of time! When I finally reached the security scanner, I took out the usuals of my laptop and liquids in a clear plastic bag. Some airports also require that you take out your iPad as well. Noticing that the man in front of me had taken out his iPad, I took a step forward to ask the employee if he wanted me to take mine out as well. Before I could even open my mouth, he barked at me saying, “Get back and stay with your bags!” He thought I was trying to go through the metal detector, which I wasn’t and told him so. He said I didn’t have to take my iPad out and then sent me through the metal detector. Thinking finally, I’m through this line, can you guess what happened? They scanned my bag, the employee working the scanner said he needed to search my bag, took out my iPad and sent everything through the scanner again. In the meantime, people behind me are being held up as well. Unbelievable.

Finally through security, of course I was “randomly chosen” for an explosives scan. So used to it, I lifted my bags on the counter before the employee even asked. “You’ve done this before obviously!” he joked. Yep, I answered, every time!

After going through Customs and with all the airport procedures behind me, I headed to the gate early and settled down. Was able to chat with my mum and give Mike a call as well. I told them my concern of missing the connecting flight from Chicago to Ottawa and we all agreed that hopefully I’ll have time in LA to grab that boarding pass from United Airlines.

Flight from Brisbane to LA was around 13 hours long but felt more like 20. The airline food was actually delicious, I was quite impressed! I chose a lunch of chicken salad with aioli sauce that was quite filling and full of fresh crisp vegetables including peas, radicchio, and celery and cucumber. Hot breakfast was a spinach frittata with beans and sausage. I also realised halfway through the flight that there is a galley in the back filled with goodies for passengers. Fully lining a backlit wall were snacks of Anzac biscuits and savoury biscotti, as well as amenities including socks and toothbrush kits. Service was great and being in an aisle seat allowed me to get up and stretch whenever I wanted without disturbing fellow passengers.

I was pleasantly surprised when I landed in LA and had someone greet me at the gate with an express envelope allowing me access to priority lines through customs and security, as well as boarding passes for the remainder of my trip. I shouldn’t be missing any flights now!

Once I collected my bags, I was directed into the express line, where I waited… and waited. Watching all other passengers fly through the non-express lanes. Why? Because there were nearly 10 normal lines and 1 express. One customs agent was alternating between my line and a regular one next to me. After a while, he skipped our line all together. After a few passengers in the next line were called and we remained ignored, I asked the gentleman in the next lane if it would be alright for me to go next, he agreed. When the agent called out, “Next!” I thanked the man again and proceeded to push my luggage cart towards the desk when the agent quickly yelled at me saying, “I was calling this line, not you! Get back in line and wait for another agent to call you!” I was appalled. What is the point of having an express lane when it is moving slower than a regular lane, even worse, not moving at all? Luckily, I could afford the wait, but I’m sure there were other passengers behind me who were genuinely concerned, and may have even missed their flight.

Unfortunately, it was all in vain. The LA to Chicago flight ended up being delayed for over an hour, causing me to automatically miss my connecting flight to Ottawa. In the past when I’ve missed flights with other airlines, I have been automatically met at the arrival gate with new boarding passes for the next available flight. It was not the case this time. Before disembarking, we were told to talk to the agents at the gate, who directed us to a panel of phones, called the “Rebooking Centre” to rebook the flights ourselves. I looked around while being on hold for what seemed like ages at other passengers who like me, were tired and frustrated at such a slow process. Eventually, I was put on another flight later that evening but had to find the United Airlines desk to collect my boarding pass.

This was when I realised the Chicago O’Hare Intl Airport is humongous. I stopped to ask a man driving an airport buggy for directions to the United Airlines counter. He informed me it was in the next terminal which is quite a distance away and offered to drive me there. It was a small gesture, but appreciated nonetheless!

Eventually, I made my way to the United Airlines counter, got my boarding pass, and asked about ensuring my luggage would be put on the correct flight. If you remember, I was never given baggage tickets so there was no way to track my bags. I ended up having to give them a physical description of my bags and just cross my fingers that they make it back to Ottawa with me.

Soon I was finally boarding a teeny tiny plane back to Ottawa. The flight was short and I remember the elder man who sat next to me. He spent the flight completing Sudoku puzzles and looked very physically fit. Made me think, I hope I keep myself mentally and physically engaged like that in old age!

Landed in Ottawa to find out one of 2 of my luggage pieces made it to Ottawa. I wasn’t too concerned but had to wait in line to file a claim. When I was asked what was in my piece of missing luggage, I replied, “Inside the suitcase is a cardboard box, filled with ginger beer, candies, and biscuits… for real.” 😛 By the time I was done, I was the last person on the flight to walk out.

My mom, my brother, my aunt and Mike were the only people still waiting arriving passengers… finally home!! Finally reunited with Michael, and my family! 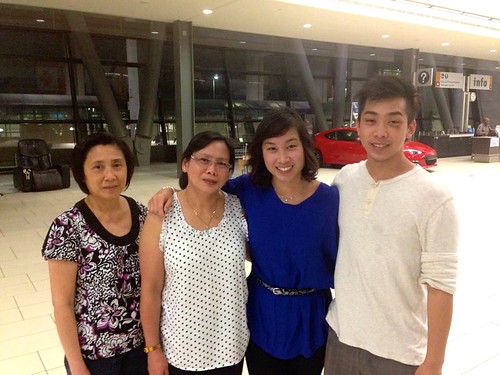 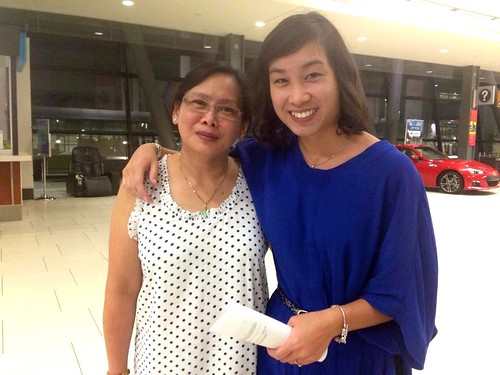 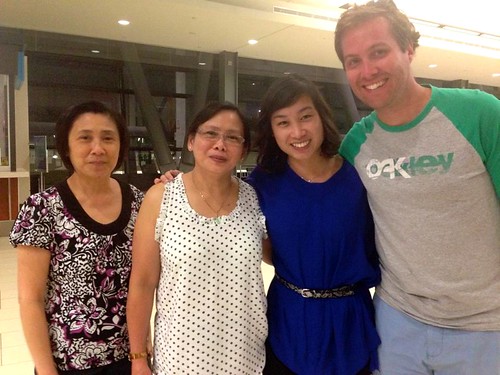