(Note: Sorry, this is going to be a long post because I want to document this part of our journey)

As some family and friends may know, the last few weeks have been incredible stressful for Michael and I as we held our breath and waited for potential job offers for next year.

Since some of you may be unfamiliar with how the Australian system works, let me try to summarize it:

In Australia, the medical degree is called an MBBS (Bachelor of Medicine/Bachelor of Surgery), not an MD like North America. They are, however, equivalent. Both countries have a 4 year program with the first 2 years being course based and the last 2 years being clinically based in hospitals.

Once you graduate, however, it’s quite different.

In North America, you apply to the residency program (specialty training) of your choice in your last year of school, in order to start shortly after graduation. These training programs range from 2 years (Family Practice) to 4-6 years for other specialties. Once you are done your residency, you might chose to do a fellowship(s) to become even more specialized.

In Australia, once you graduate, you must complete an internship year before you receive your full registration. This year consists of 5 rotations: general medicine, surgery, emergency medicine and 2 electives. Following intern year, many doctors do a Junior House Officer (JHO) followed by a Senior House Officer (SHO) year in order to gain experience and get to know seniors in their field of interest before applying to a Registrar Training Program (equivalent to the North American Residency program). The length of the Australian training programs are about 2 years longer, with General Practice being 4 years. Overall, the training takes a few years longer in Australia vs North America.

Now that you know more, here is our story. Both Michael and I want to stay in Australia after graduation and complete at least our internship year. For that reason, we have not completed all the required exams in order to apply for residency back in Canada this year. Depending on how internship goes, we would be more than happy to stay in Australia to complete our training. The problem was, however, where we stood when it came to applying for an internship position.

The state of Queensland has 6 priority groups (you can see them HERE), and jobs are allocated in order of your priority. According to the list, as Canadians studying in QLD, we are Priority 4 (P4). Unfortunately, there are not enough jobs for the number of applicants. Not only did both Michael and I want jobs, we wanted jobs in the same city in order to be together… what were the odds?

In order to apply, you had to preference 16 hospitals in Queensland from 1 to 16, #1 being the hospital you want a job offer from the most. Therefore, jobs are allocated first in order of priority, and second in order of preference. All Priority Groups submit their preferences by the same date. However, P1s get allocated their positions first. Once they have accepted or denied their offers, the remaining spots are finalized and published. At this time, P2-6s have the opportunity to submit a new list of preferences if they wish.

For example, if a P4 listed Hospital A as their first preference, but after P1s have been allocated their jobs, there are no spots left at Hospital A. He or she may choose to submit a new preference list topped with other hospitals that still have spots.

After a lot of thought and talking to our senior colleagues and friends, both Michael and I decided to chose Rockhampton Base Hospital as our first preference. We had read and heard first hand from many people that Rockhampton had many new and continuously expanding facilities, numerous educational opportunities, consistent workplace support, great teaching from senior physicians, and attractive intern to consultant ratios.

This was this year’s Position Status Report after P1s had accepted their offers and P2-P6 had submitted their second preference list. Note the number of intern spots remaining vs the number of P2-P6 who applied. 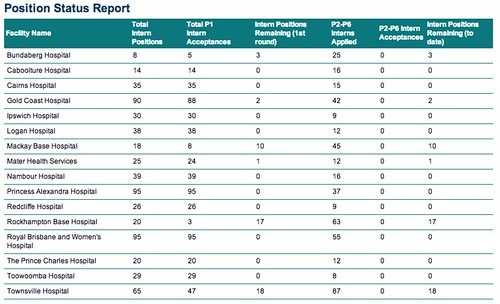 There were 20 spots total available at Rockhampton. Luckily, it turned out not to be a popular hospital with the Australian students, with only 3 people who preferenced it high enough to get a spot. That left 17 spots leftover for the 63 (P2-P6) applicants who had listed Rockhampton first, slightly less than a 1 in 3 chance.

We had been told that unlike P1s, job offers for P2-P6s were not random. We would be specifically selected based on the (unknown) criteria/interest of each respective hospital.

What could we possibly do to increase our chances of getting an offer from Rockhampton? There were lots of rumours, but here’s what we decided to do:

These were the photos we sent in: 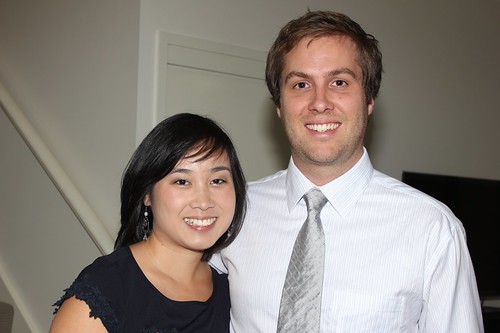 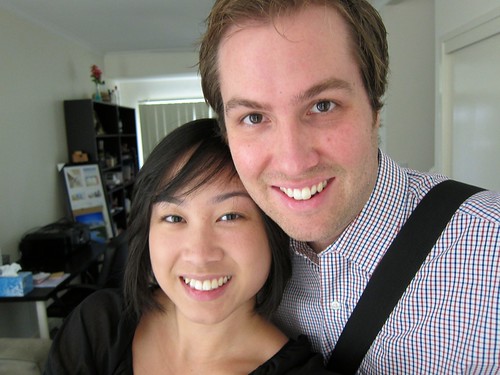 Soon Monday, July 28th came around, and I heard from my friend Amanda (who had also applied to Rockhampton) that they were starting to make phone calls. Not with job offers though, they were just asking for answers to the questions mentioned above. Michael and I didn’t receive a phone call that day, presumably because we had already given our answers via email, but we were still nervous.

Then came afternoon/evening of our July 29th, business hours of Wednesday July 29th in Brisbane. This was the day that Rockhampton offers were scheduled to come out. We waited with bated breath. Nearly 7pm my time (11pm Michael’s time) Amanda messaged me to say Rockhampton was starting their phone calls because she just received a phone call from them with a job offer. Congratulations to her, how freakin’ exciting!

But then my heart started pounding. I was FaceTiming with Michael and we were incredibly nervous and stressed. Would we get a phone call? Would it be just one of us? Would luck be on our side and we both get job offers? It was really agonizing.

Nearly an hour later, Michael couldn’t stay awake any longer and he had an early day ahead of him. We said our good byes and he went to bed with his cell phone beside him and volume on maximum in case he gets the phone call.

I was beginning to stress. There are only 17 positions to give away. Surely the phone calls do not take very long. It had been over an hour since Amanda got her offer, did we miss out?

I decided to log onto Skype and try calling my cell phone, just to make sure calls were going through. Yep, it was ringing (as 0000123456) through fine, I quickly hung up. 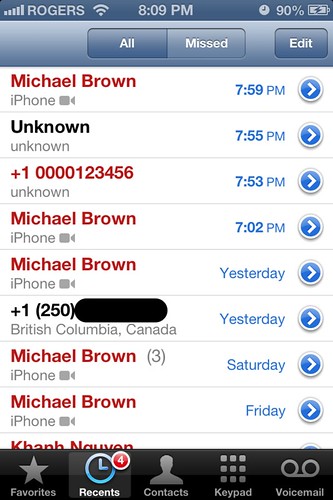 Now I kid you not, literally 2 minutes later, my phone rings, from an Unknown caller. I picked up, “Hello, Sandra speaking.”

I don’t even know how to describe exactly how I felt in those next few minutes. Relief and happiness flooded through me as the officer told me she had great news and wanted to offer me an internship position at Rockhampton Hospital for 2015. I really almost cried. I immediately thanked her and told her how incredibly happy I would be to accept her offer. She explained to me that the official offer will be arriving by email in the next few hours and to make sure I respond to it by the deadline.

Before I could ask her if Michael had received an offer too, she said, “Now, I’m about to call Michael next. I have no idea what time it is for you guys over there right now.” I laughed and told her it was after midnight for Michael and he had just gone to bed but don’t worry, his cell phone was right beside him. She was so lovely, she even asked if it would be okay to call to call him at this hour. I said most definitely and that he would be thrilled to hear from her. I thanked her again and we hung up.

Less than 5 minutes later, my FaceTime rang and I knew exactly who it was. I answered to Michael’s beaming face (the officer had told him I received an offer too), we couldn’t believe it! We had beaten the odds, both of us had been offered a position at Rockhampton Base Hospital – our first preference. We were now a statistic – 2 out of the 17 available positions! 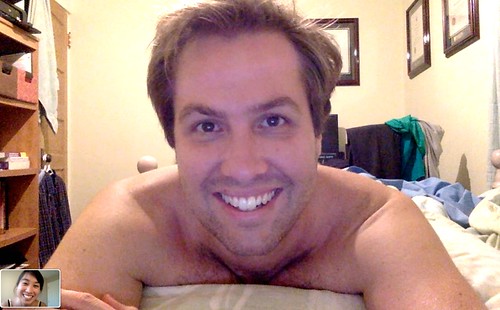 We were so ecstatic and relieved. We both had a job, and therefore a career and our feet in the door towards our future! Michael said, “Now that we have jobs, we can finally start planning our wedding!” And how true!

The excitement kept Michael awake for a couple of hours talking to me before he could go back to sleep. The sleep deprivation no longer mattered once we found out we had jobs for next year! 😛

And that, is the story of the best news I’ve received since the start of my medical degree. Best belated birthday present too 🙂 I have since emailed my referees to let them know the good news and thank them again for playing a part in my future – they were super pleased for us as well.

By now, we have also heard from a number of our Canadian friends who didn’t receive a job offer in Queensland 😦 Emphasized for us again how lucky we are and fingers crossed for them that they will soon receive an offer from out of state or from the private sector (Commonwealth Medical Internships – CMI).

If you’re still here reading, then thank you for your interest and sharing this happy moment with me!