It wasn’t long at home in Ottawa after our electives in Nova Scotia until we had to go back to Brisbane.

One on hand, I was tired of living out of a suitcase these last 2 months and excited to get settled back into our house with Mike. On the other hand, I wanted to stay in Canada longer with my family and friends!

We had an early 7:45am flight – thank you to my mom, brother and Uncle 3 for taking us (and all our luggage) to the airport! 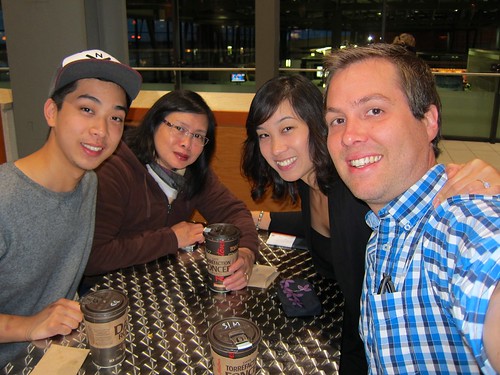 We usually book our international flights out of Canada with Air Canada, for their prices and good service. While looking into our flight back to Brisbane, Michael came across Air Canada’s Premium Economy Class, which at the time, cost approximately $100 more than a regular economy class ticket. A section in between business class and economy class, sounded appealing!

After a bit of research, we couldn’t pass up the opportunity to fly Premium Economy at such a low additional cost. You can read more about it HERE, but these are some of the perks we appreciated with Premium Economy class:

There are currently only a few selected routes that offer Premium Economy, including Montreal to Paris and Vancouver to London. We chose to fly Vancouver to Hong Kong.

Although we bought a Premium Economy ticket from Ottawa to Hong Kong, that class was (as expected) not available on our flight from Ottawa to Vancouver. Instead, we were given preferred seats (extra leg room, close to front) with a complimentary meal. We were also able to enjoy all the priority services with this leg of the flight – which to us, is one of the best parts of traveling.

Vancouver to Hong Kong was much more exciting 😛

Here is what the cabin looked like. Surprisingly, it was practically empty, there must’ve been around 10 of us in total. 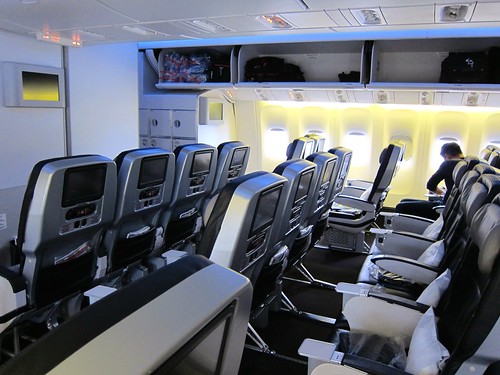 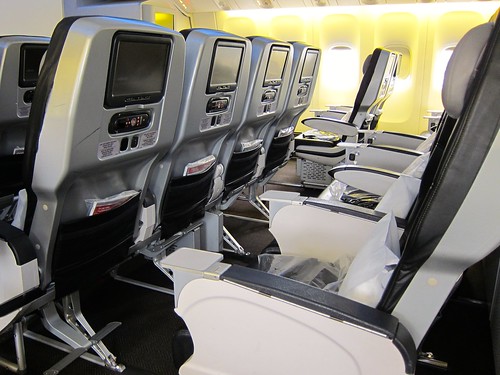 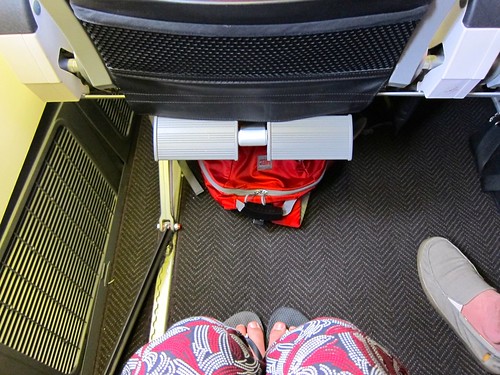 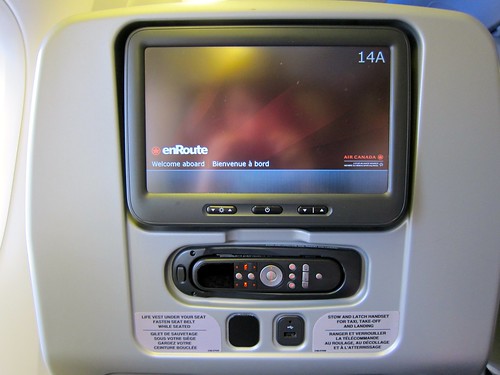 Settled in and ready for a long flight! 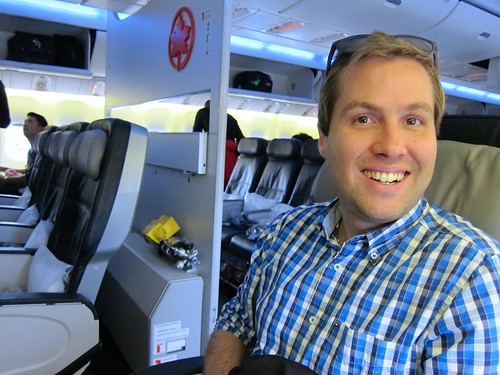 Our welcome beverage of orange juice – no other choices were offered. 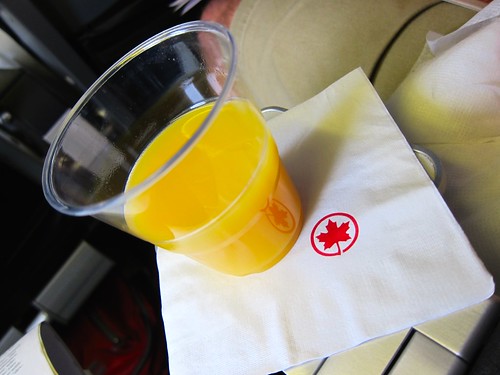 Our flight menu, handed out at the beginning of our flight along with newspapers 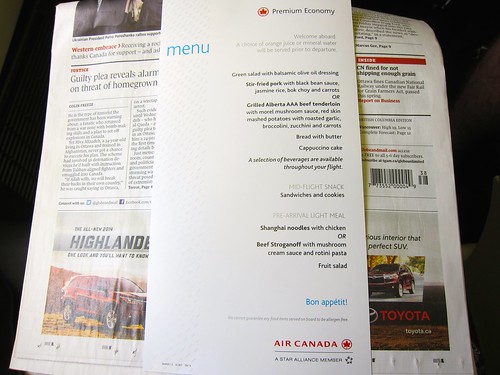 Our amenity kit. Had the essentials (toothbrush/toothpaste, eye mask, ear plugs, and socks) although not nearly as nice as the ones given in Business/First class 😉 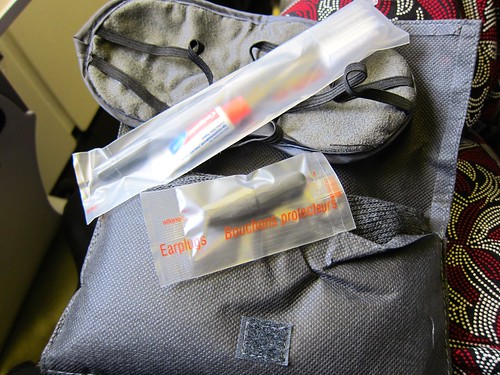 Our first meal of green salad with balsamic olive oil dressing. Grilled Alberta AAA beef tenderloin with morel mushroom sauce, red skin mashed potatoes with roasted garlic, broccolini, zucchini and carrots. Bread and butter. Cappuccino cake. The salad was fresh and crisp although I’ve had much better bread. Beef was well done and bland, however, the meal was overall good, especially because the dessert was quite nice. 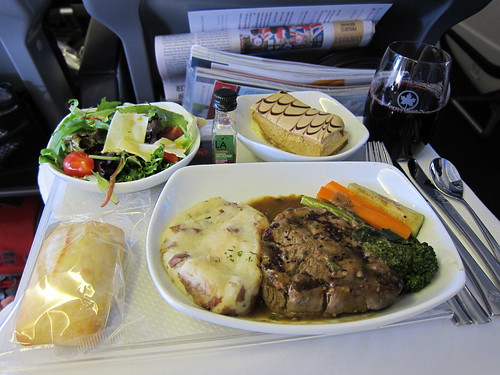 Wine was good too! 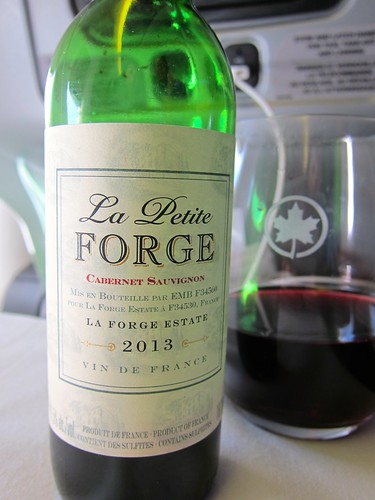 We did not realize that only one meal was premium. For our next meal, it was the same as served in Economy class. A choice between Shanghai noodles with chicken or Beef stroganoff with mushroom cream sauce and rotini pasta, with bread and a fruit salad. Meal was so so! 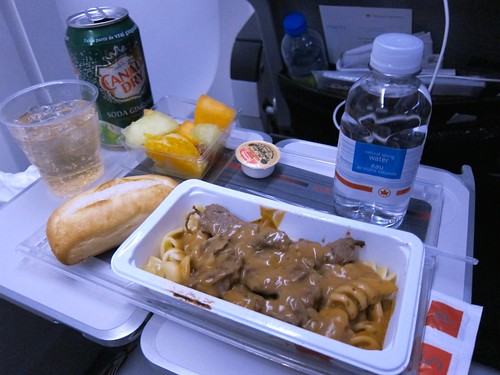 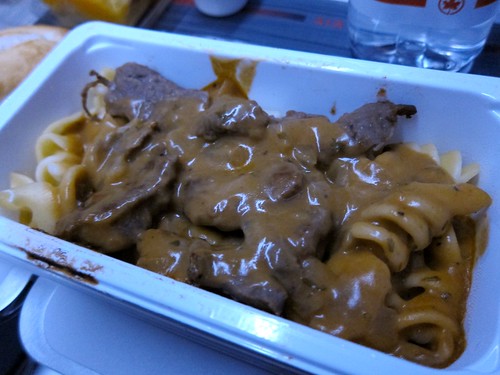 Prior to landing, we were also served a snack of chicken salad sandwich and Peak Freans cookies.

Despite the cabin being nearly empty, we found the service to run the extremes – either super rushed or insanely slow. For example, flight attendants flew around the cabin to give us menus and amenity kits and just as quickly zipped away. Later during the flight, when we pushed the call button, we were actually never attended to – which has never happened to us, ever, on any flight. I had garbage leftover from a meal that was never collected and I wanted to get rid of it so I could stow away my table while Mike wanted a drink. During our 15+ minute wait, we rang the bell 3 times, in case they didn’t hear us or was busy at the time and forgot. Eventually, we were able to flag an attendant who appeared but disregarded our call light. Service was particularly disappointing, as it was way below the average service we’ve received in Economy class.

Some of the advertised perks of Premium Economy are not unique, such as power outlets/USB ports and complimentary wine & spirits, and pillow/blanket (did not receive a ‘large’ pillow like advertised) which are also available for Economy Class passengers.

Overall, we definitely enjoyed the flight and the perks that came with it, especially priority services, extra baggage, extra seat and leg room, and better food. Would we purchase a Premium Economy class ticket again? Yes, certainly if the price difference was as small as this time!