Hungry… Matt, Mike and I were driving down The Parade looking for an inviting establishment for dinner.

Michael spotted the word Samurai and that was all it took to find parking and walk back to the restaurant.

Samurai Teppanyaki House is a tiny establishment with novel decor that serves… you know it, teppanyaki.

Deprived of good Japanese food all year, seeing the chef at work, and watching the patrons happily enjoying their food, it didn’t take much convincing for us to ask to be seated.

The staff apologised that they didn’t have seating for 3 at the grill so we could have a better view of the chef at work. We said it was not a problem and actually didn’t mind sitting at a window table. And, as you can see, we still had a good view! 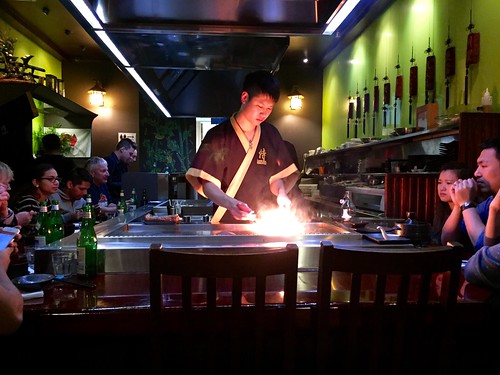 For those who aren’t familiar with teppenyaki – it is Japanese cuisine cooked on an iron griddle. Teppan = iron plate and yaki = grilled/panfried. As the grills are often an open space, you can watch the chef prepare your dishes in front of you.

The menu was small, simple, and tantalizing. But yes, it was also pricey. I would not suggest visiting this restaurant unless you were prepared to spend $50+. 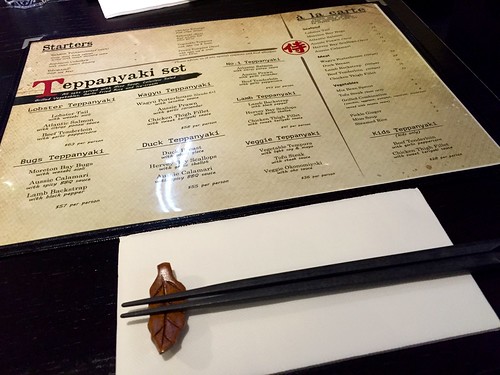 It took a while to make up our minds because everything sounded delicious, but we did eventually. 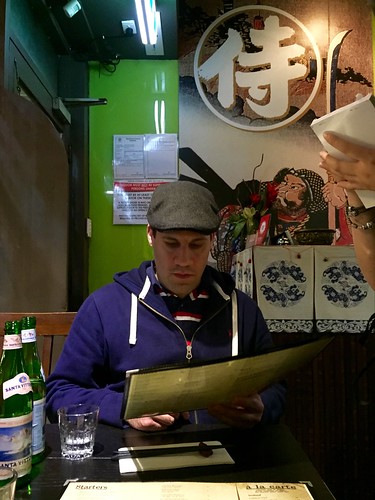 Both the miso soup and coleslaw salad were refreshing! 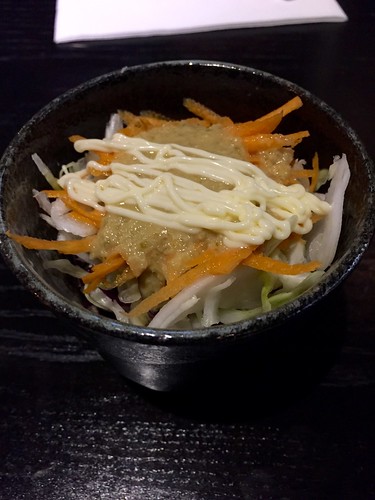 The calamari serving was generous and grilled perfectly – leaving it tender and not chewy. 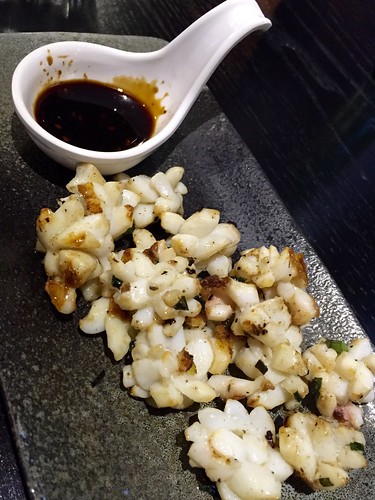 Our first time trying Moreton Bay Bugs. Delicious, somewhat similar to lobster, but mildly disappointed that they have so little flesh! 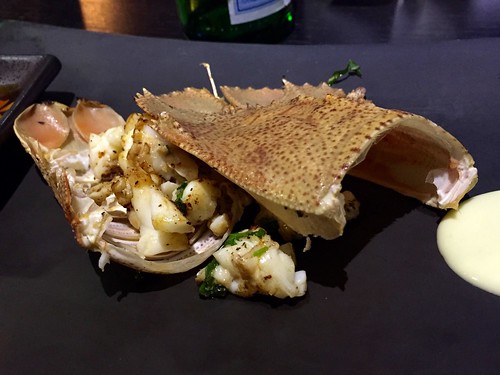 Lamb backstrap cooked medium rare as he likes it! 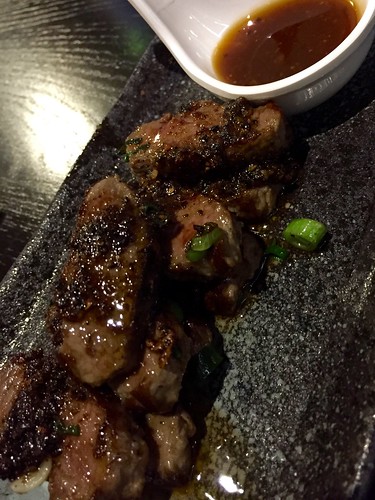 I chose the No. 1 Teppanyaki set – Atlantic Salmon with citrus ponzu sauce, Aussie prawn with garlic coriander, and beef tenderloin with garlic peppercorn ($43). Unfortunately, they didn’t have beef tenderloin so I exchanged with duck breast with plum sauce (+$14). To be honest, I felt that if they didn’t have a component offered on the menu, another option should be offered at no extra cost, but I didn’t say anything about it at the time.

Salmon was not overcooked paired with a subtle ponzu sauce leaving the dish well balanced. 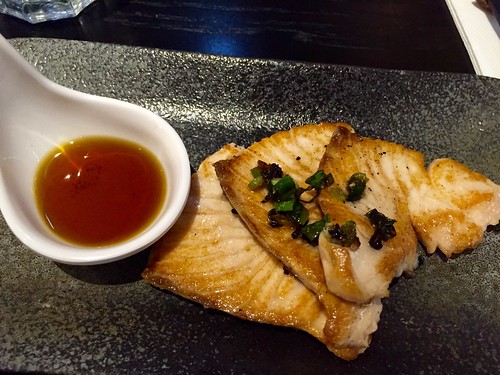 Only 3 prawns but they were large, fresh, and bouncy! Also well seasoned and cooked too. 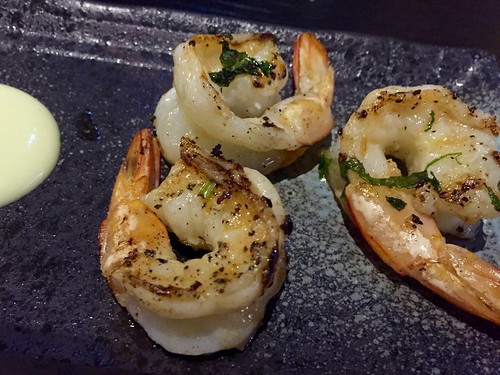 My portion of duck was larger than anticipated (yay) with crispy skin, however, I do wish the fat was more rendered! 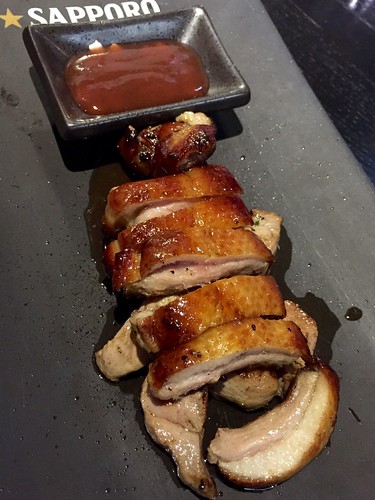 Matt made his own set as he is vegetarian choosing Hervey Bay Scallops, Atlantic salmon, and Aussie Calamari ($41).

His scallops were good but lack the nice grilled/fried colour many like to see. 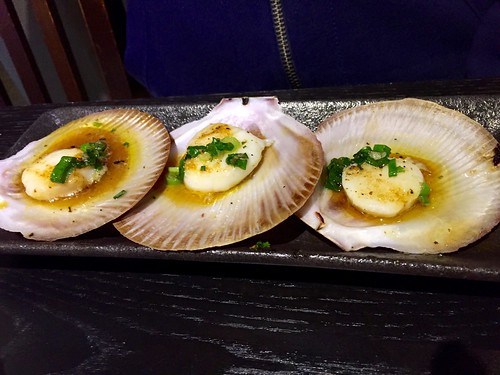 Can’t forget our fried rice and grilled veggies – it was delish! 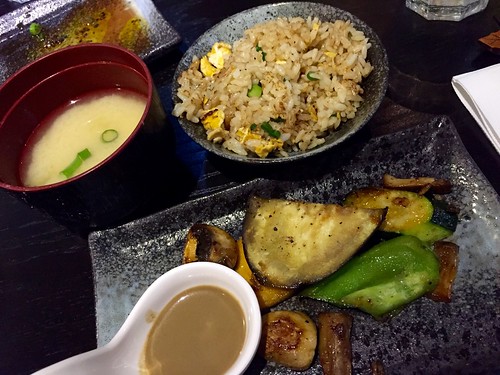 We finished our night with some green tea and black sesame ice cream – which we haven’t had in almost a year!

An unexpected but delicious and satisfying dinner out in Adelaide which partly satisfied our Japanese cuisine craving! Would definitely recommend a visit to our friends, for the service, atmosphere and food. 🙂