After running around all day meeting with our some of our wedding vendors, we ended the night with a highly anticipated event – World of Poutine – Ottawa PoutineFest!

Michael and I have never had the pleasure in participating in a poutine event, and living in Australia for the last 5 years has certainly deprived us!

Ottawa PoutineFest took place over May 5-8, 2016 and included things like:

Located by Ottawa City Hall, we were joined by my siblings and our cousins. More people meant more variety, which is perfect because we ate… so much. It was worth it! 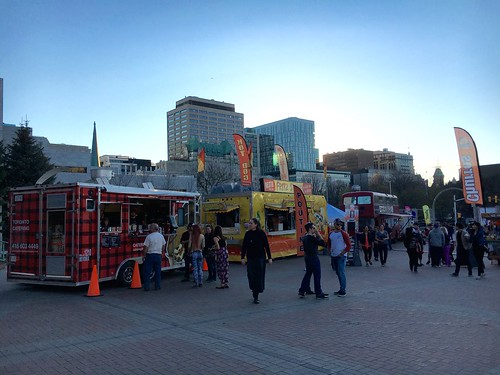 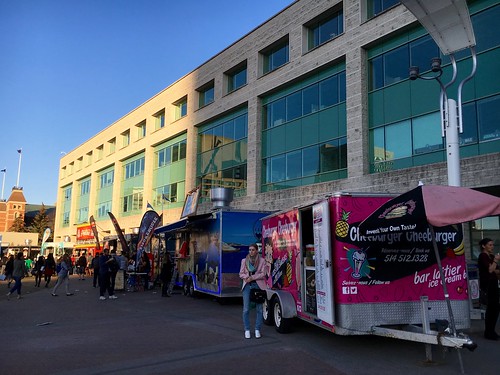 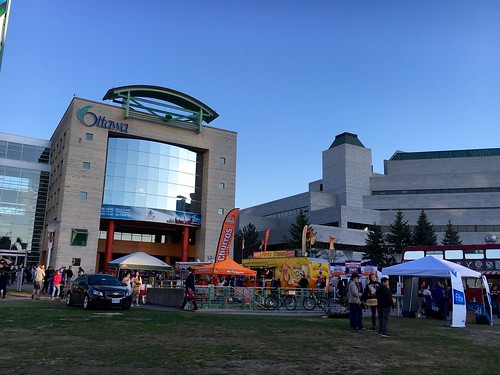 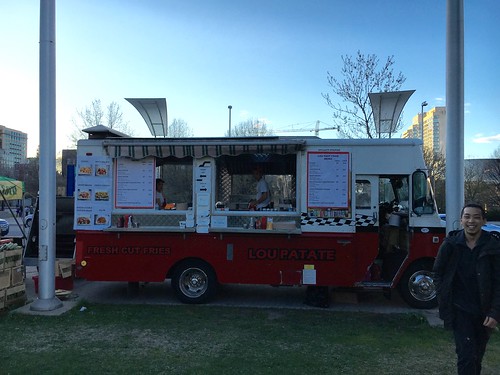 My sister Jenni and cousin Janet – so nice all being in town together! 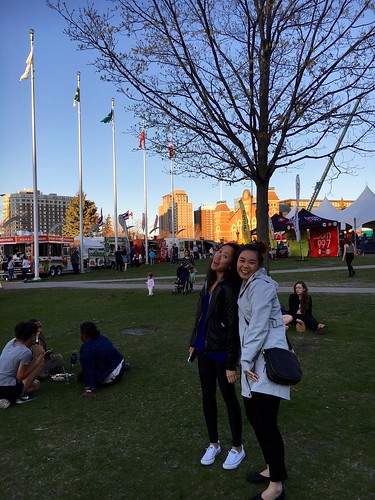 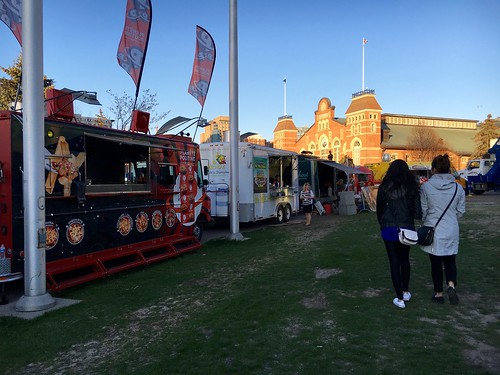 Tons of poutine trucks to choose from! 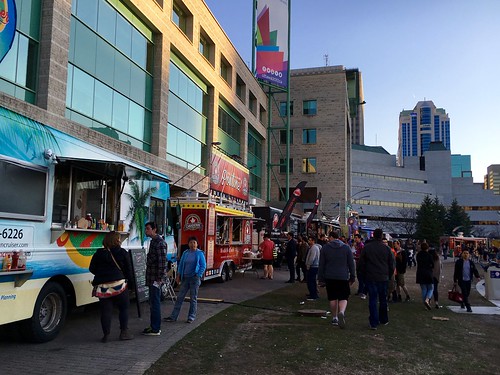 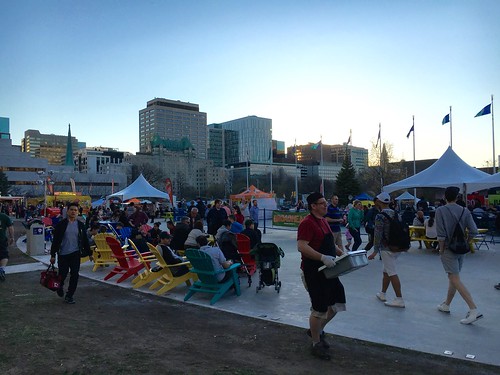 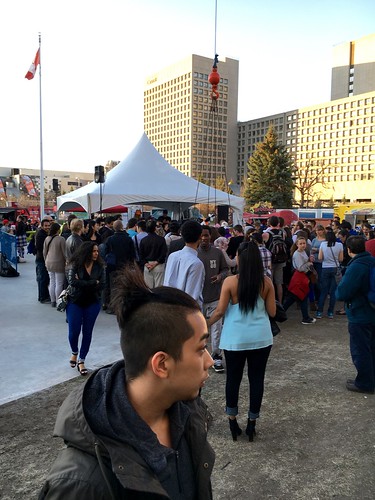 What happens when you attend a poutine festival with a bunch of people… you get to try so many things! 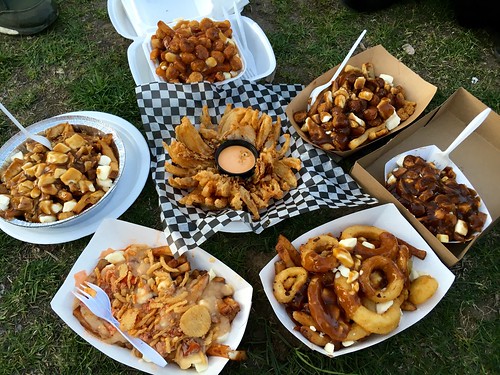 And when even more people join! 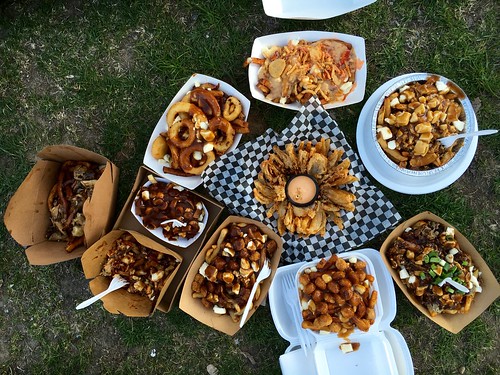 The Upper Deck had one of our favourite poutines – the Classic Halifax Donair! 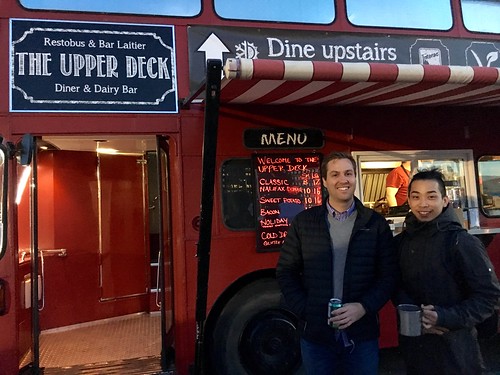 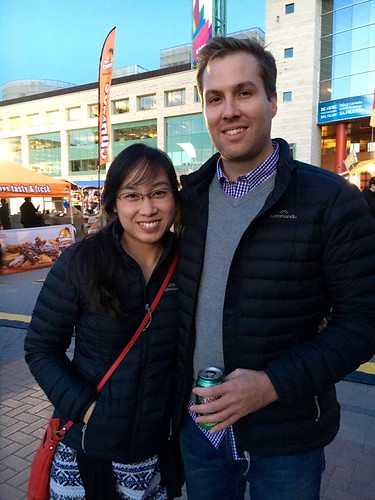 What goes perfect as dessert to poutine? Beavertails of course! Another iconic Canadian food! That meant a short walk from City Hall to the Byward Market. View of downtown Ottawa at dusk – gorgeous! 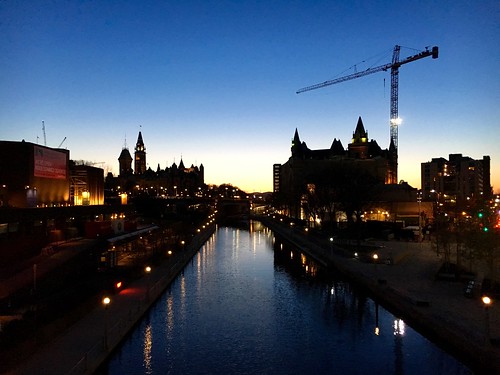 Mmm, what is better than ending your meal with a soft, chewy, fluffy pastry dipped in cinnamon sugar and sprinkled with lemon juice?! Kilaloe Sunrise is my favourite beavertail option on the menu! 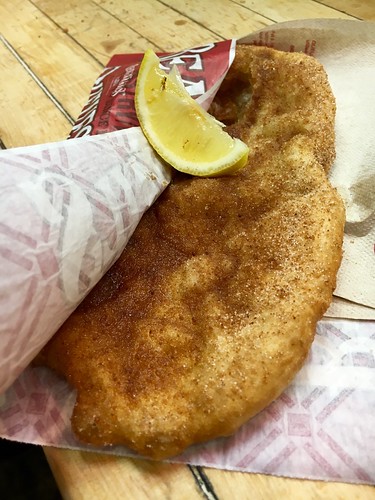 So much cholesterol was consumed this night 🙂 So happy! Thanks everyone for hanging out with us! 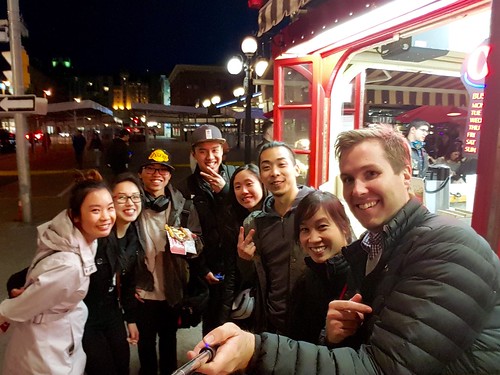 Today was my last full day in Ottawa and it turned out to very full and busy!

We invited my grandparents and my cousin Janet to lunch at Play (as you can tell by now, I really like that place). Most people had never been there before and I thought it would be a good experience.

We had reservations for 12pm and asked specifically to be seated upstairs because I find it nicer. 😉

Once everyone arrived, it took us a while but we eventually decided on our 2 dishes each. There were a number of repeats at our table, including the hanger steak, sweetbreads, Walleye, scallops and clam linguine

My brother, grandpa and I had sweetbreads (thymus of a calf/lamb) for the first time. Unfortunately, it’s not on the current menu so I can’t give the full dish description. I didn’t know what to expect and I’m glad I can say I’ve tried something new, although I didn’t love it. The taste and texture was a mix of really soft chicken plus mild liver (and I don’t like liver, unless it’s pate). The blend of flavours was good though!

My mom and grandpa ordered the scallops / cider / cauliflower / raisin / bacon / brussels, which were quite tasty, although I don’t have a picture of them. 😦

My grandma and sister ordered the Walleye / chorizo / beans / grapefruit / fennel / brown butter. Like myself the other day, they found the dish too bitter and the beans too crunchy for their taste.

My mom and Janet had the little neck clams / linguine / parmesan / chili / soffritto /garlic. The portion was enormous, but apparently the dish was just way too bland. Very disappointing!

My grandma and brother got the frog legs / polenta / truffle / eggplant / radicchio / caper. I think both were underwhelmed with the dish, especially my brother who wished he had chosen something else.

Janet and I also got the grilled hanger steak / mushroom / frites / aioli. Yum! Unlike Mike’s steak from the other day, this one was super tasty and I was really glad I chose this dish.

Lastly, my sister’s second dish was the beef slider / cabbage / bacon / cream cheese / matchsticks. I don’t think she fully enjoyed this dish, especially because there was a spread similar to tuna on her beef slider. The matchsticks were also not as good as having actual frites.

It was still a fun experience though!

For dessert, we went back into Byward Market for baked goods at Moulin de Provence – one of my favourite bakeries in Ottawa and also home of the famous Obama cookies.

Doesn’t this amazing selection make your mouth water? And all for such good prices too!

Trying to smile with food in her mouth…

We walked through the market before saying good bye to our grandparents who were going home first.

The rest of us went shopping at Rideau Mall for a while until our stomachs had enough room for… Beavertails! For those who don’t know, they are delicious fried dough pastries, a Canadian treat! Waiting in line for our order…

Some shots in the market as we wait…

Mmm! I got the Kilaloe Sunrise – which is the classic cinnamon & sugar beavertail with a spritz of lemon juice – delicious!

We didn’t get home til after 5pm, which is when my cousin Flora, invited us to go skating with her siblings. There’s an outdoor rink outside City Hall called the Rink of Dreams, that is apparently gorgeous at night. How could I say no? Janet went home to grab her skates and belongings since she planned to stay over. We would meet her at the rink instead. My sister also decided that it would be a good idea to invite the rest of our other cousins to come over afterwards for my last night in town.

The cousins who went skating!

Some footage of the pretty Rink of Dreams and of my sister falling! 😀

The cousins came over shortly after we got back from skating. We had a few good solid hours of boardgames, food and laughs. Thank you so much for coming guys! I hope we do it again soon!

I stayed up late to finish packing, but finally called it a night and went to bed around 3am!

FYI: On the day I left Ottawa, 40cm/16″ of snow (should be more since some melted and compacted) had fallen!

As a kid growing up in Ottawa, Canada – BeaverTails were always a traditional treat to look forward to, especially during the wintertime while skating on the Rideau Canal.

A long time craving has led me to try and make them myself. The dough isn’t exactly the same – but they’re pretty tasty!

For those who don’t know – BeaverTails are a Canadian treat that first started in Ottawa. They’re fried pastries that have been individually hand stretched to resemble a beaver’s tail and topped with various condiments – the traditional one being cinnamon & sugar. My favourite is the Killaloe Sunrise – which is cinnamon and sugar with a spritz of lemon juice.

And the Rideau Canal is a man-made waterway that connects the city of Ottawa to the city of Kingston. It is the oldest continuously operated canal system in North America, and in 2007 it was registered as a UNESCO World Heritage Site (thanks Wiki!). In the winter, a portion of the canal is drained and becomes the world’s largest outdoor skating of approximately 8km. My absolute favourite activity during the winter – skating on the Rideau Canal!