Celebrating Michael’s 36th birthday with a special night out! After much anticipation, we drove down to Capricorn Resort Yeppoon for our 6:30pm dinner reservation at Tsuruya Japanese Restaurant.

Indulge yourself in the authentic, personalised interactive table cooking and tradition of the exquisite and delicate flavours of Japanese cuisine. Tsuruya also features a Sushi Bar for made to order sushi rolls and the freshest local seafood sashimi prepared right in front of your eyes.

We were greeted at the entrance on arrival and shown to our table. Happy to find that they had given us a table in a corner by the window, a little quieter and more private. The female servers were dressed in nice kimonos which added to the ambiance of the restaurant.

How cute are the place settings? The kimono napkins were a nice touch! 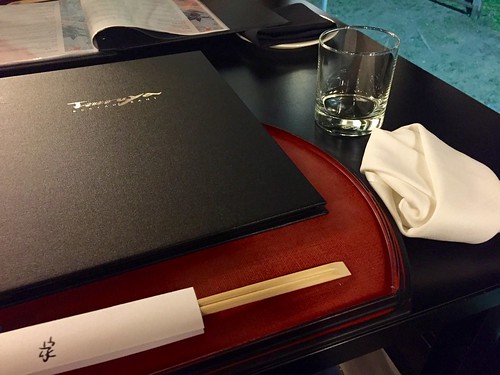 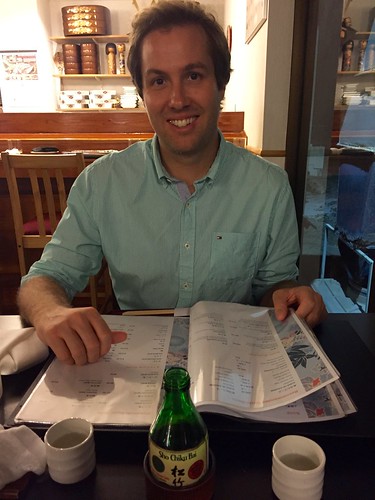 Didn’t expect the restaurant to be very busy on a Tuesday night during down season, but surprisingly it was! Lots of families with young children throughout the evening. 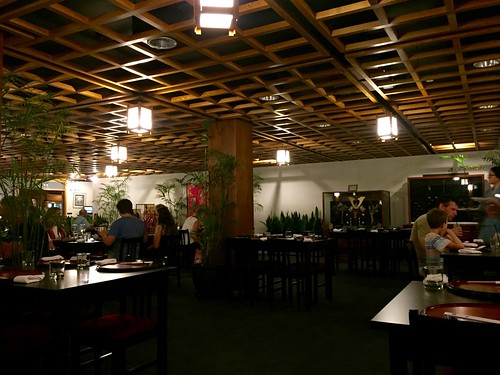 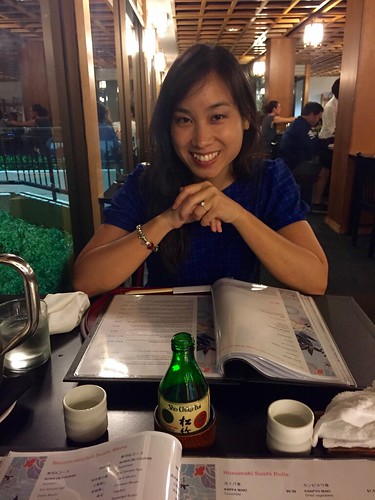 Chef at the sushi bar, keeping an eye out on his guests 😛 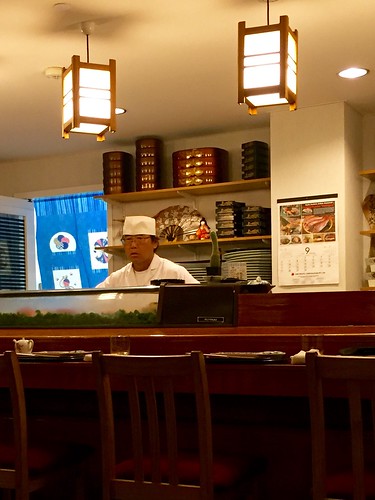 After perusing the menu, we finally decided on some sets.

Our appetiser Gyu Sashimi – Raw beef thinly sliced and served cold with a vinegar flavoured soy. We had never had anything like this before, very refreshing taste! 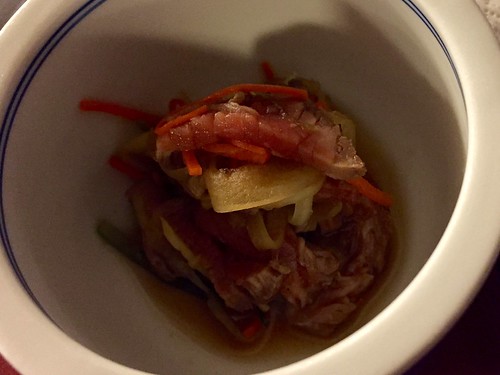 With the above appetiser, I also received my Ebi Shinjoh Age – Deep fried prawn & fish cake. Nice that there were 2 pieces so I could could share one with Mike! A little on the dark side from frying but good flavours and a nice chewy texture. 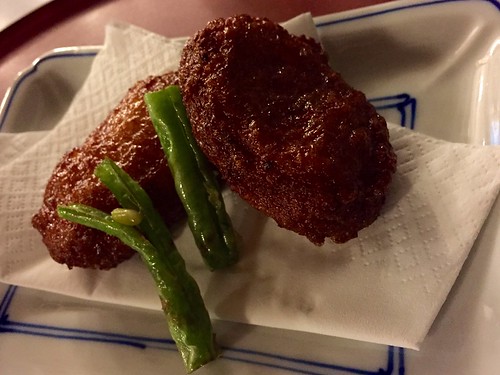 Sitting by the window, we saw a kangaroo come by for a graze on the lawn! 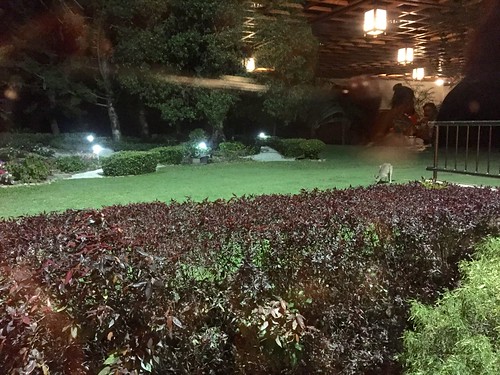 Our next course – soups! 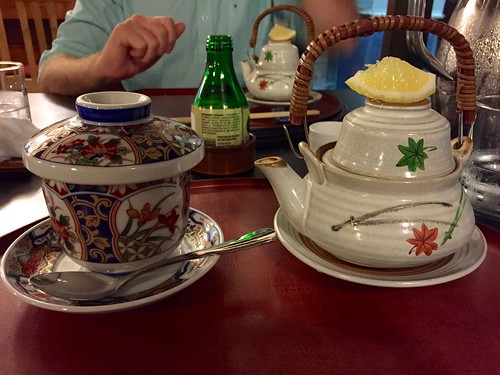 Both Michael and I received Dobin Mushi – Seafood, chicken and mushrooms in a clear soup served in a traditional Japanese pot. Absolutely loved the presentation. Served in a teapot, we were instructed to add a bit of lemon juice and pour the broth into the teacup to slowly enjoy. The broth was clear and so incredibly intense in flavour! Also lovely to eat all the morsels of seafood at the bottom of your pot as well. 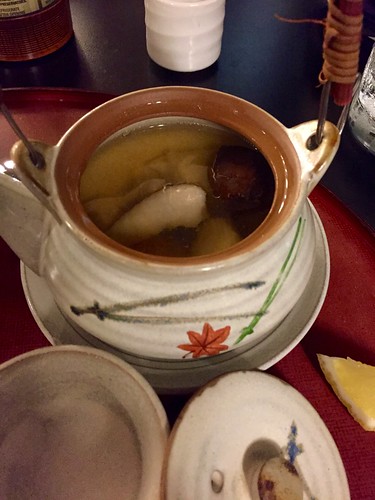 My set came with a second soup – Chawan Mushi – seafood, chicken and vegetables cooked in a hot savory egg custard. Extremely delicate, silky and delicious, never had anything like it! 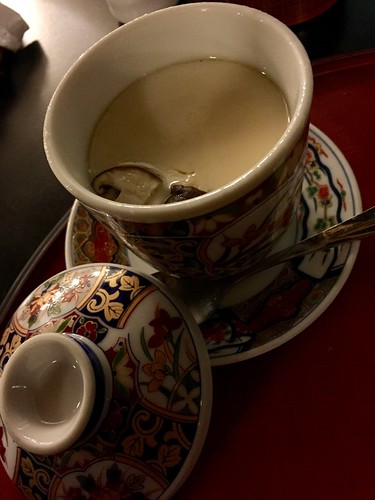 Onto our meat dishes!

For me, Yakitori – pieces of chicken and onion on bamboo skewers with homemade BBQ sauce. Chicken was super tender and well flavoured. Loved this! Again, the portion was large enough to share with Michael, which was nice! 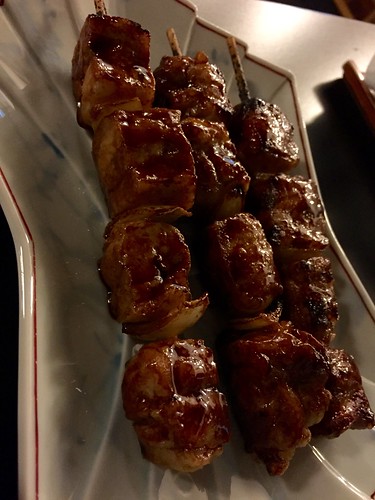 Michael’s steak came with a hot stone that allowed him to further cook the steak at his seat, it also came with a light dipping sauce. The steak was tender but served a little overcooked (to his liking) since you’re supposed to cook it more, and a little under seasoned, even with the dipping sauce. 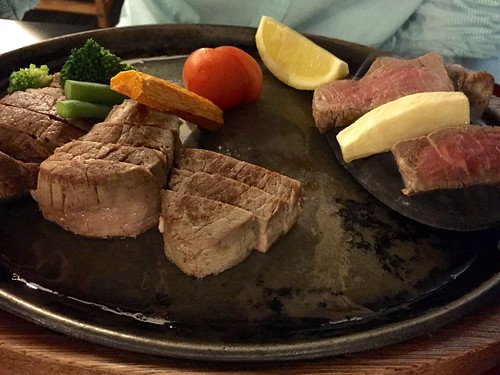 And finally, our assorted sushi box! Beautifully presented with a mix of scallop, prawn, eel, and fish – with a side of ginger and wasabi. We have heard raves of how fresh the fish is at Tsuruya, but unfortunately for us, we didn’t find the same that night. Some pieces were better than others, but certainly not the buttery textures we were expecting! 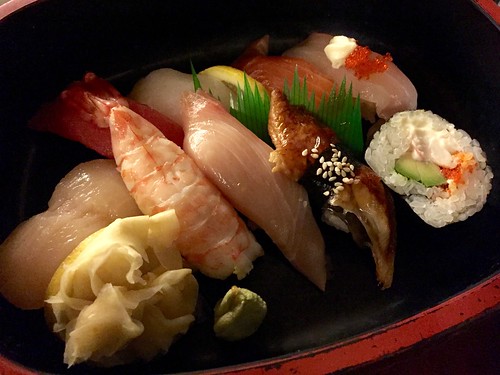 Overall a lovely night out for the birthday boy with some incredibly tasty food! (Except for the sushi unfortunately…) Also great value for money and we look forward to coming back to try the lunch menu 🙂

Our time together can summed into a few words – family, fun, laughter, and delicious food.

Some more moments of our time together… 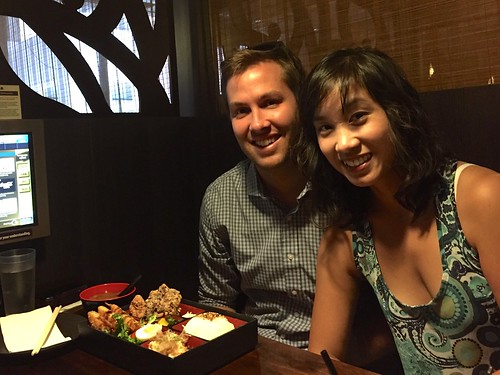 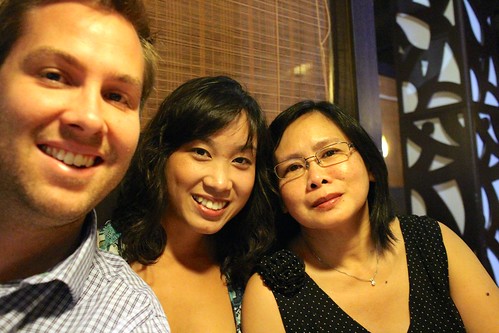 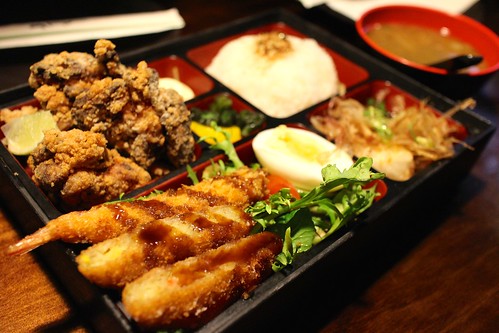 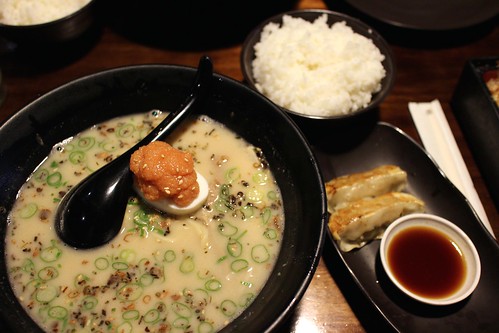 One of my new favourite meals to prepare – grilled fish with tropical salad – delicious and healthy! 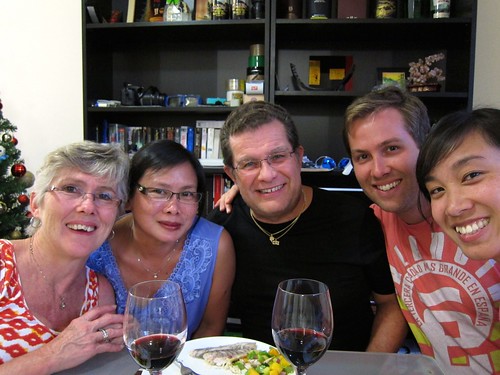 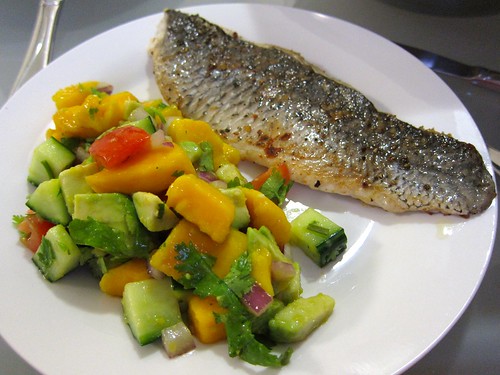 It was a bittersweet farewell. But we were pretty excited. Excited to start preparing for our move to Rockhampton and beginning our careers as doctors in the new year. Sad to say good bye to our parents but we would be back in Canada in Feb-March for our holidays!

No time to diddle daddle, lots to do!

Bill drove Michael up into the city from New Germany as we had our final exam the following day.

Of course, we couldn’t say farewell without a final meal together. We ended up at Dharma Sushi, one of Bill’s favourite Japanese restaurants. Walked into a narrow restaurant with 2 rows of small tables lining the walls, a few occupied by obvious regular patrons – always a good sign! 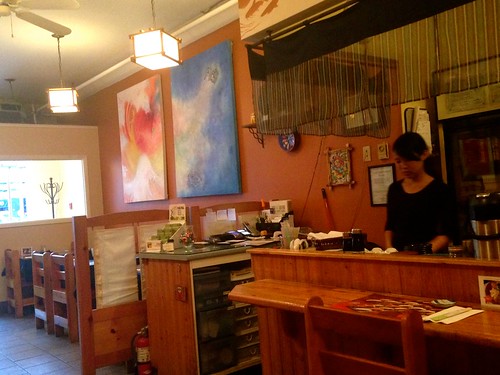 Started with some warm sake around the table! Couldn’t celebrate too much, had an exam to study for! 😉 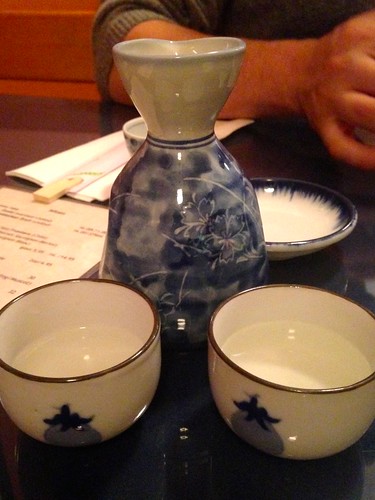 We shared a couple of appetizers, including a dish of Gyoza (6pcs for $7.95). Thin, crispy, delicate skins enveloping a nicely seasoned meat filling. 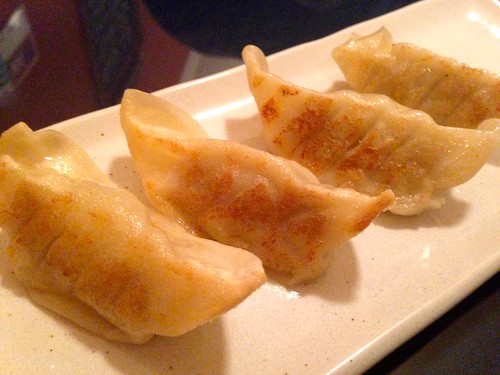 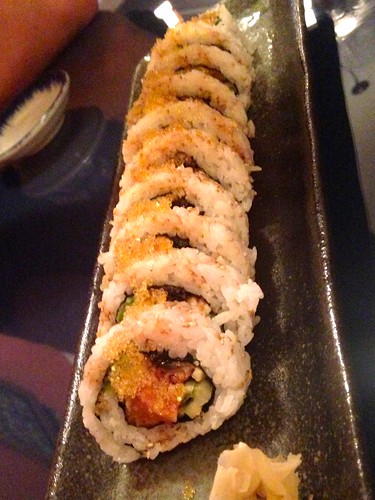 For mains, we all couldn’t pass up the new menu item: Dharma Ramen with shio-kouji (salted rice malt) based broth ($10.95). The ramen was good, but not the best we’ve ever tasted. Bill loved the ramen, however, both Mike and I found the broth needed more flavour. The noodles were excellent, but some fattier slices of pork and a medium boiled egg would’ve certainly added more richness to the dish. 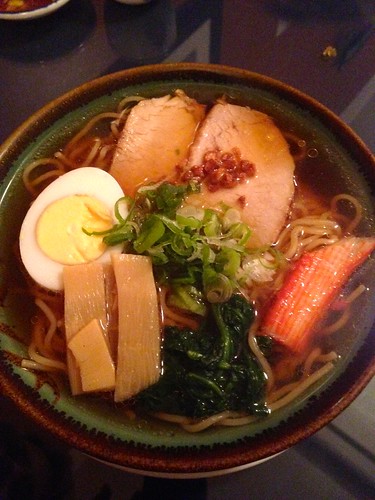 It was nice to see you Bill, thanks again for everything! 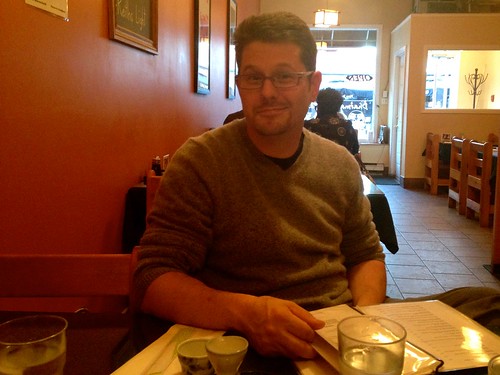 A great little restaurant offering delicious Japanese cuisine with exceptional quality service, highly recommend! Would love to visit again when I’m back in Halifax to try some of their other dishes! 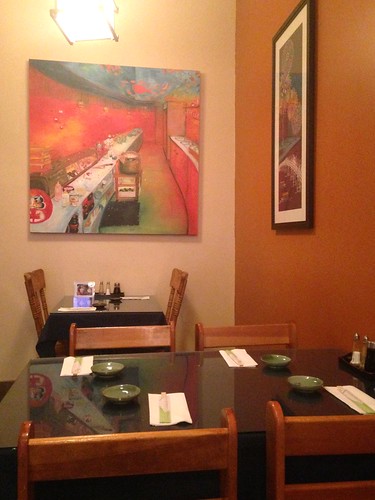 Happy new year everyone! I wish you all health, good fortune, and prosperity!

Last year, Mike and I had went out for a Chinese New Year banquet and then to check out some of the festivities with Christine and Tan. This year, we didn’t really celebrate as we are pretty stressed out with studying for the MCCEE.

But we had to at least go out for food. So a quick Japanese dinner at one of our favourite places, Wagaya in Fortitude Valley.

And tonkotsu ramen for me… which was way too much for me, especially as upset tummy recently. But delicious as always!

The lion dancing had just started when we were done and heading home so we paused to watch for a few minutes. Didn’t stay for very long but it looked like many people were enjoying the show!

Look at this cute gift my grandparents gave Michael and I before leaving Canada. Can you guess what was inside? Lucky red envelopes for both of us! Thank you Ong Ba Ngoai, from the both of us!

And lucky pockets from my mum before we left as well! I actually forgot she gave us these until she reminded me and had to go find them! 😛

Thank you also to my Aunt and Uncle 2 for a red pocket before I left, I almost forgot! 🙂

HAPPY NEW YEAR EVERYONE! Have a safe and great time!

On Friday, we were able to get out of the hospital earlier than usual. That meant an opportunity for a late lunch date!

Gyoza Bar Ann had been on our list of places to try, specifically for their dumplings. We arrived a little after 2pm, loudly greeted at the door by very friendly and hospitable staff.

The lunch menu included Tower Lunch Boxes ($12 each), which of course, we each got. Each Lunch Box comes with steamed rice, a green salad and the choice of one out of 12 main dishes. 6 of the choices are gyoza (dumplings) and the other 6 vary from teriyaki, karaage, sashimi and tofu.

We missed the lunch rush 🙂 Lovely restaurant almost all to ourselves!

And, since it was Friday, we got drinks! Asahi for Mike and a Chu-Hi Lychee cocktail for me 🙂

We didn’t have to wait long for the food, even though it says 10-15 minutes on the menu. Our dumplings came out on a sizzling hot plate with some onion and green beans. The staff brought over the gyoza sauce which we poured into the hotplate and let the flavours sizzle away for a minute more.

Rice was slightly overcooked but good flavours. Salad was fresh with a lovely dressing.

The dumplings were crisp with flavourful filling. My cheese gyoza also had tomato in it, added to the juiciness of the meat. Mike’s dumplings were oh-so-spicy – I couldn’t handle more than one.

A really nice experience, we will definitely come back to try different dishes soon!

Thanks to Kee Ping for organising the surprise birthday party for Amanda on Saturday, June 16th! We had the private function room at Sono Japanese Restaurant with 17 people altogether.

The privacy of the room was pretty nice, although I wish the 2 tables weren’t so segregated. Unfortunately, it was impossible to facilitate conversation between both tables at the same time. Service was very friendly, the servers wore lovely Kimino outfits and were very accommodating. Even though we were in a closed room, we weren’t forgotten and constantly checked upon.

The food, however, was quite expensive and dishes were hit-or-miss. Some people were quite happy with their dishes but others found theirs lackluster.

Here were a handful of dishes at my table:

Ebi (prawn) Tempura. Delicious, but expensive at $15 for 3 prawns.

Soft Shell Crab with Shiso Salsa ($15) – Great dish with nice flavour and acidity. A little too much salsa than needed for the burst of flavour so the crab quickly got soft.

Tenzaru Soba ($19) – This was my dish, which I chose because I had never had cold noodles before and wanted to try something new. The dish was quite bland if not for the tempura and unfortunately, I got really bad food poisoning later that night (the only one in our group who got sick and who had this dish). I’m almost sure it was from the cold noodles itself, probably Bacillus cereus, which is often associated with improperly stored starchy foods (ie. rice, noodles, pasta). Seriously the worst pain of my life, thank god it was over quickly.

The most interesting, but unfortunately, the most disappointing dish of the night: Seafood Houbayaki ($26). Individually served and cooked at the table, rice is extra.

Extremely bland! You can even see there seems to be no seasoning involved.

Moving on to dessert and festivities with the birthday girl! 🙂

Amanda was puzzled, trying to guess who was the person who ordered the chocolate cake decorated with macarons. Turns out it was from her sister back home in Malaysia!

Great night and got to meet some lovely people! 🙂

Would we come back to Sono? Probably not. Don’t get me wrong. We had a fantastic evening – service was great, with lovely traditional decor and great ambiance. However, most of the group agreed that it was too expensive for less than impressive food. It seemed like half the group really enjoyed their food and the other half (which included the 4 people who ordered the Seafood Houbayaki) simply thought, “Meh.” Also, the food poisoning was unfortunate and extremely unpleasant!